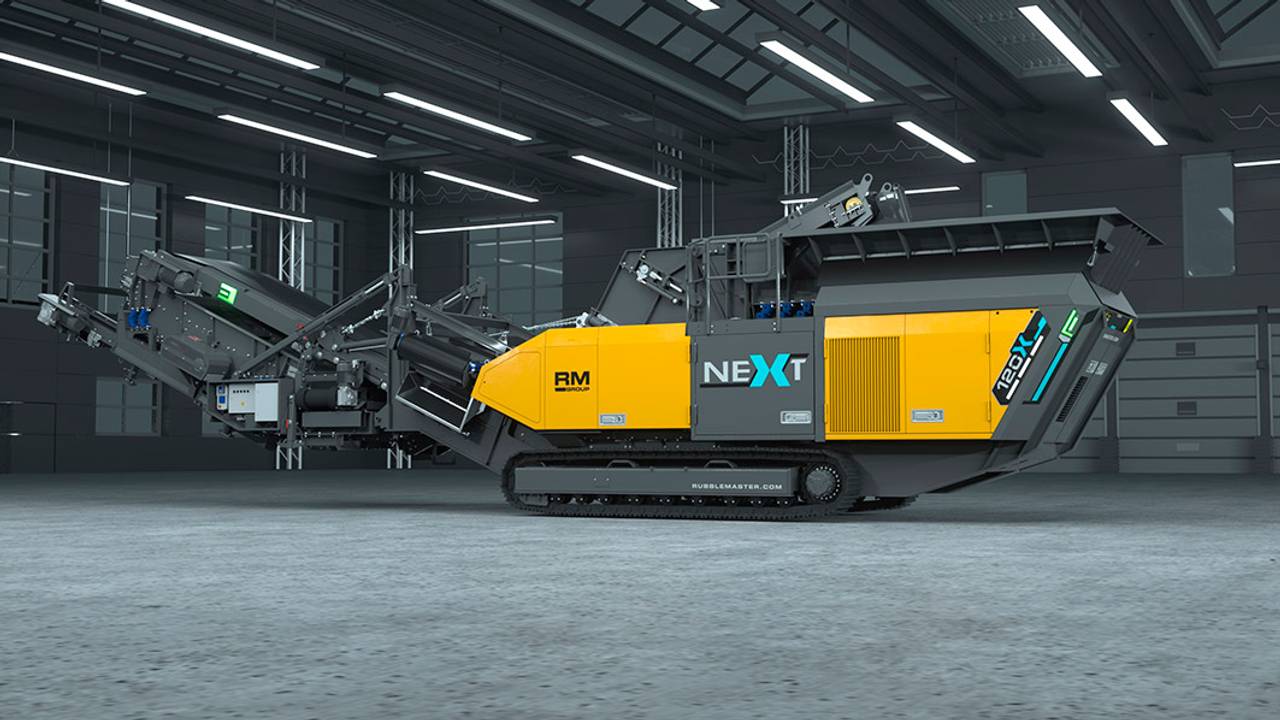 RM Group is launching series production of a new machine range, part of the company’s latest product philosophy called ‘RM Next’. The RM 120X is the first crusher to be developed in this series, which is also planned to be exhibited at bauma China next week, taking place from 24 to 27 November. RM Group’s Chinese sales subsidiary, Tianjin Rubble Master Technology Co Ltd, will be present at the show.

The new RM 120X will combine enhanced safety with maximum performance and flexibility. At the same time, RM Group maintains its proven service and intuitive ‘Go!’ operation concept, which it continues to expand. The company revealed that after the crusher, an RM screen will follow in 2021.

The prototype of the RM Next product philosophy was unveiled at bauma in Munich in 2019. “With this philosophy, we are once again setting standards in user-friendliness,” said Gerald Hanisch, founder and owner of Rubble Master (RM).

The RM Next product philosophy focuses on four points. One of them is extended service, which includes both the standard five-year warranty and the annual service.

Simplicity is another focus, which will be ensured despite the extra features, equipment options and configurations that have been developed based on customer requirements. Mr Hanisch asserted, “Operating an RM 120X still involves only a few buttons. The built-in screen is only used to display information and has no sub-menus. We have received valuable input for this operating concept from our customers around the world, and the controls and display meet the specifications on jobsites 100%.”

Safety is also an important focus. With RM Next and the comprehensive operator-machine interface, the operator no longer has to enter the danger zone while operating the machine and can see light signals indicating both the status and current workload of the crusher from the excavator cab.

An additional focus was on the optimisation of material throughput. Here, RM Group implements job-specific crushing equipment for the respective material and real-time analysis. This reduces running costs and increases turnover.

The company mentioned that optimisation starts with the machine configuration, and therefore five main application cases are available with the necessary equipment options. Furthermore, the performance indicator on the machine and the RM Go! Smart system immediately detect potential improvements so that they can be implemented straight away. This optimisation concept works well with both natural stone processing and recycling.

In the past, there were reportedly various companies specialising in natural stone processing in the Chinese market. However, with the increasingly strict environmental regulations imposed in recent years, numerous stationary crushing plants and low-price machines have been banned from the market because they do not comply with the regulations.

As such, the demand for environment-friendly mobile crushers have been rising in China. According to RM Group, its fleet of mobile crushers and screens is not only the quietest in the industry, but also meets the strict environmental standards. The manufacturing process and design of RM machines take into consideration the reduction of emissions and noise levels.

RM Group introduced its diesel-electric drive concept for compact mobile crushers nearly 30 years ago. Many RM products can be purely electric powered, an option that is high in demand and often necessary, especially in inner-city construction sites.

China’s local and national authorities have also been promoting recycling of construction & demolition (C&D) waste, making it a promising business sector, said RM Group. At present, the recycling rate in China is less than 10% while in Europe and the US, it is already 90%. In Japan and South Korea, the recycling rate is up to 95%.

RM Group believes that China’s C&D waste recycling industry will continue to grow strongly in the future, as evidenced by the fast expansion of the company’s local dealer network over the past two years.

Since its establishment two years ago, Tianjin Rubble Master Technology has focused on the recycling and natural stone industries across China. More dealership contracts were signed this year, and there are now 13 local sales and service partners that look after customers in 12 provinces.

“When we started developing RM Next, we always had our entire product range in mind. In future, an important role will be played by networking different products in operation at the same job site. However, we can only make this happen if all the products work according to the same philosophy,” explained Mr Hanisch.

RM Group said intensive work is currently underway to network RM machines that work together. This means that the throughput of the screen can be adjusted in future to match the utilisation of the crusher. Machines downstream from the crusher can also stop automatically if the crusher is currently not processing any material. These optimisations are designed to increase efficiency and save running costs.