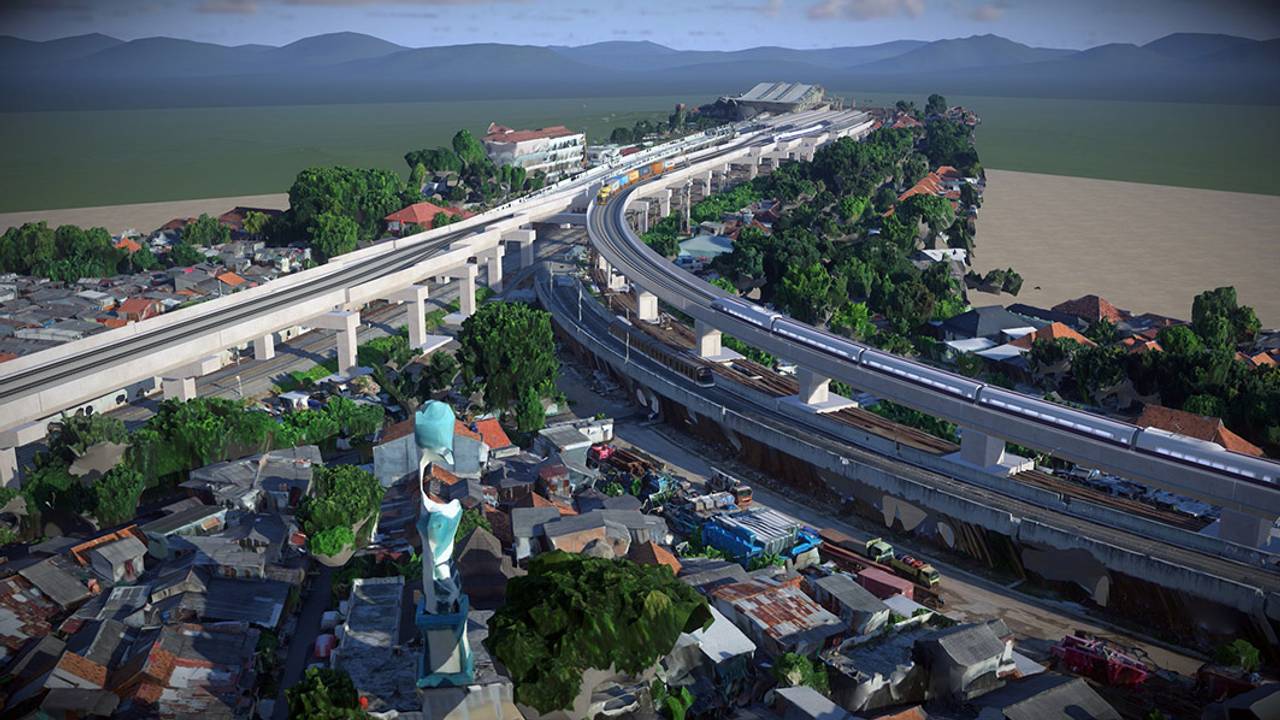 The Jakarta metropolitan area in Indonesia, known locally as Jabodetabek, is expected to become the world’s largest city by 2030. Home to 35.5 million people, it is already one of the most congested cities in the world.

The city’s commuter rail system is under extreme pressure, causing Indonesia’s national rail operator Kereta Api to invest in improvements to increase capacity, provide greater reliability, and deliver a better experience for the over one million daily users across its network.

The Manggarai Station is currently a transit station on the Commuterline Jabodetabek and Soekarno - Hatta Airport Rail Link. Due to its future potential to cater for increased capacity, the station is being redeveloped and will replace Gambir Station as the terminus for long-distance trains serving the city in late 2021.

To achieve this goal, Indonesia’s Ministry of Transportation appointed PT. Waskita Karya (Persero) Tbk (Waskita), in a joint venture with PT. Pijar Utama, as a contractor on Phase II of the project.

Waskita made it its goal to construct a new bridge connecting the second floor of the station’s main building with the existing mainline at grade, together with new track panels above and below the bridge. However, the company encountered various challenges on the project. In addition to construction, the client required Waskita to take on the design review of the existing contract drawings due to discrepancies with current standards and existing conditions.

As a result of the high amount of train traffic in Manggarai Station, the team faced constraints on the method of construction that it could use, running the risk of incurring additional time on the contract. Waskita also needed to pay particular attention to the prestressed concrete beam bridge segment, which accounted for 30% of the contract’s value.

The project’s success hinged on three main objectives: quality compliance, cost, and time efficiency. Therefore, Waskita needed a software solution that would help make every decision throughout the 720-calendar-day contract period both timely and accurate. For this reason, the company decided to adopt BIM workflows and a digital twins approach using Bentley technology.

Geometry control capabilities in OpenBridge Designer enabled Waskita to calculate accurate geometry and coordinate information for each bridge segment, then export the data directly to the manufacturer. This practice helped mitigate against the significant risks associated with ordering segments of the wrong size or number.

With significant constraints that included the need to keep lines on the existing railway operational throughout the construction schedule, and due to its ability to visualise and clearly communicate planned activities to other team members and stakeholders, Waskita adopted Bentley’s Synchro software to perform 4D construction modelling on the Manggarai Station project.

“Setting up a digital twin with Bentley’s technology is very convenient,” said Marsa Achadian Tyarpratama, BIM junior expert at Waskita. “When the client urged us to give options concerning what outcome that they wanted to achieve in this project and how much it will cost, there was no better way to point those options out than visualising it with the digital twin.”

Combining design information for tracks, civils, bridges, and structures, with a 3D reality mesh of the existing ground, Waskita’s BIM coordination model has helped the company and different stakeholders on the project to make better, more informed decisions.

Having helped identify budget shortages within the design review, Waskita’s coordination model allows the company to clearly visualise different alternatives in terms of project scope and cost. It is proving to be a critical part of Waskita’s ongoing work and negotiations with its client for project amendments.

The use of OpenBridge Designer, OpenRail Designer and ContextCapture for clash detection and resolution on the project meant that Waskita has avoided issues that might not have been discovered until construction commenced. Because it could identify potential problems earlier in the process, the company avoided additional time and cost overheads of approximately 0.3% per month. Waskita’s use of geometry control functionality in OpenBridge Designer has helped mitigate the risks and avoid the unnecessary cost and delays associated with incorrectly cast bridge spans.

In response to demands for more clarity on construction sequences, Waskita’s use of Synchro helped shorten the construction schedule by optimising the resources available. Adoption of this digital workflow enabled right-first-time construction, as well as provided valuable insight for Waskita and other stakeholders on the project.