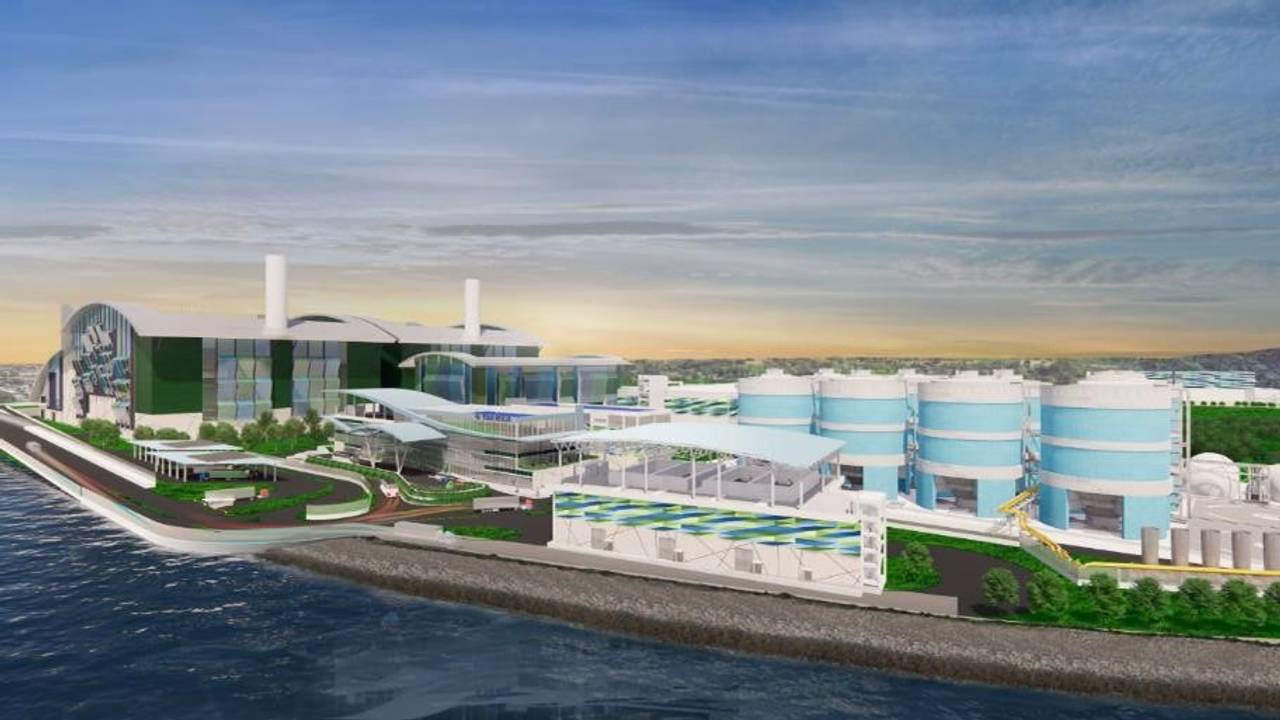 An artist’s impression of Tuas Nexus facility, which shows the co-location of the IWMF (left) and the Tuas WRP (right).
SingaporerecyclingNEAsustainable solutionPUB
Views: 321

Deemed the world’s first integrated waste and water treatment facility to be conceptualised and planned from the ground-up, Tuas Nexus will be energy self-sufficient by harnessing synergies from Tuas WRP and IWMF. According to NEA and PUB, this is expected to result in carbon savings of more than 200,000 t of CO2 annually, equivalent to taking 42,500 cars off Singapore’s roads. In addition, the co-location of both facilities will result in land savings of up to 2.6 ha.

Tuas WRP, a key component of PUB’s Deep Tunnel Sewerage System (DTSS) Phase 2 project, will have an initial treatment capacity of 800,000 cu m per day. Unlike conventional water treatment plants, it is equipped to receive both domestic and industrial used water streams from two separate deep tunnels for treatment. In a first for Singapore, Tuas WRP will also be capable of treating industrial used water to a sufficiently high standard for industries’ use.

NEA and PUB added that besides incorporating advanced physical, biological and chemical treatment processes, Tuas WRP will also house the largest membrane bioreactor facility in the world – this will enable the plant to be more energy efficient while occupying less space compared to existing water treatment plants and avoid the need for a long sea outfall. A NEWater factory to be built on the rooftop of Tuas WRP will significantly boost PUB’s NEWater production capability.

Ng Joo Hee, chief executive of PUB said, “By itself, PUB’s Tuas WRP would already be breaking new ground, including housing the world’s largest membrane bioreactor. But when coupled with the NEA’s IWMF to form the Tuas Nexus, it would be so much more. We are building Tuas Nexus because it is the smart thing to do, as the sum would be far greater than its two parts.

“I believe the Tuas Nexus advances the state-of-the-art in sustainable urban waste management and resource recovery, and establishes a new international benchmark for the field.”

IWMF is an integral part of NEA’s long-term plan to meet Singapore’s solid waste management needs. It will be equipped with advanced solid waste treatment technologies to improve energy and resource recovery from waste. It is Singapore’s first integrated facility to treat incinerable waste, source-segregated food waste and dewatered sludge from Tuas WRP, as well as to sort household recyclables collected under the National Recycling Programme (NRP).

Tan Meng Dui, chief executive officer of NEA said, “Tuas Nexus is the world’s first greenfield project to harness the co-location synergies of two mega waste facilities for waste and water treatment. Besides being part of an integrated Tuas Nexus facility, the IWMF, on its own, will also be the largest, most advanced, efficient and integrated yet of our solid waste treatment facilities. The integrated facility shines the way for a more circular approach to resource management and, brings us one step closer to realising the vision of a Zero Waste Nation.”