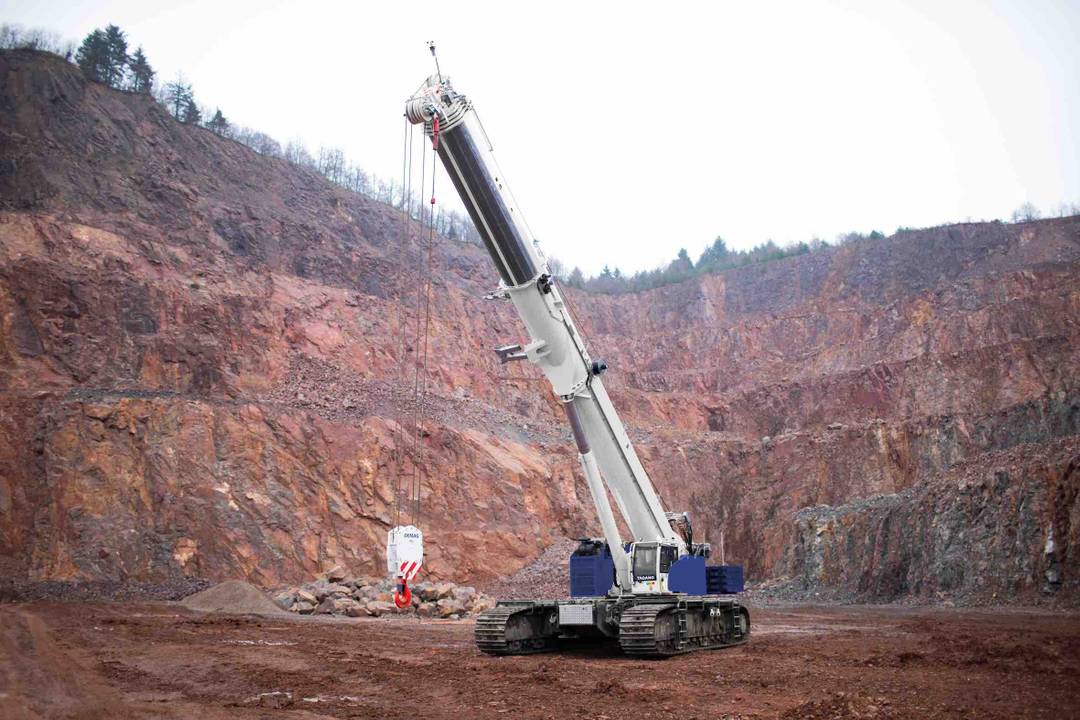 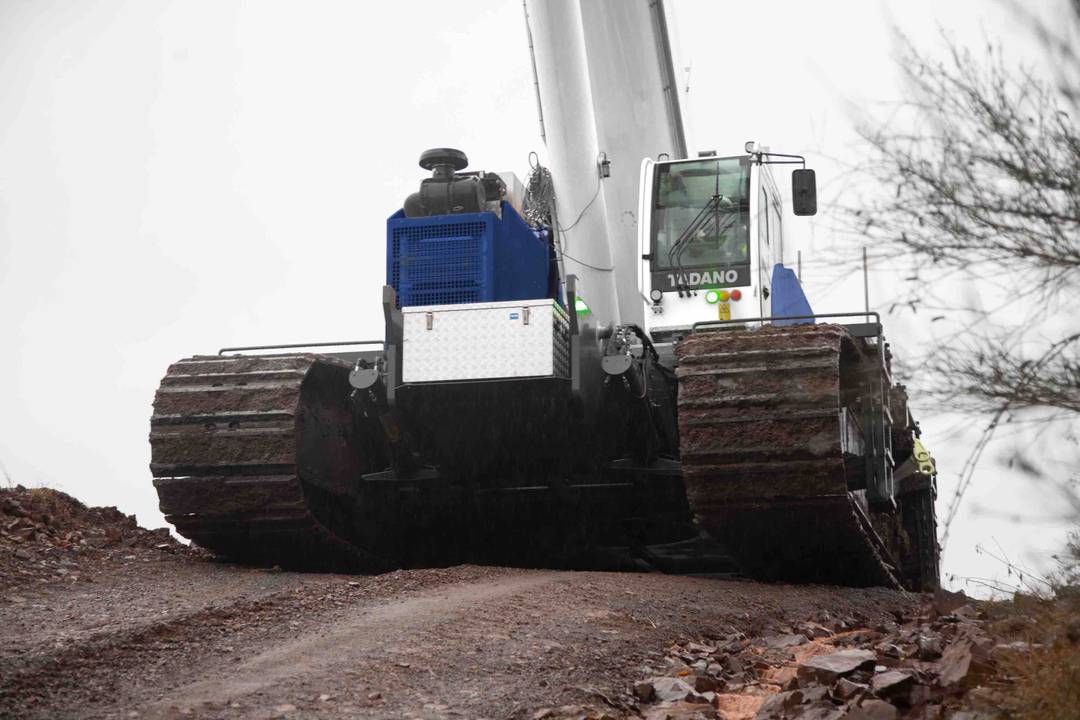 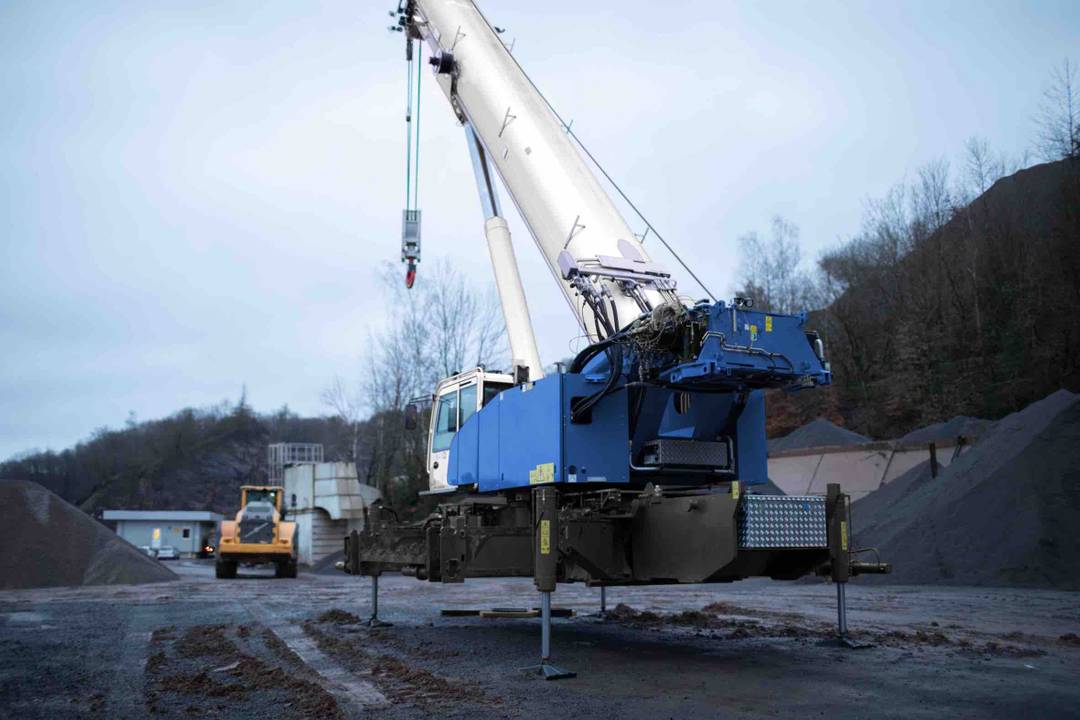 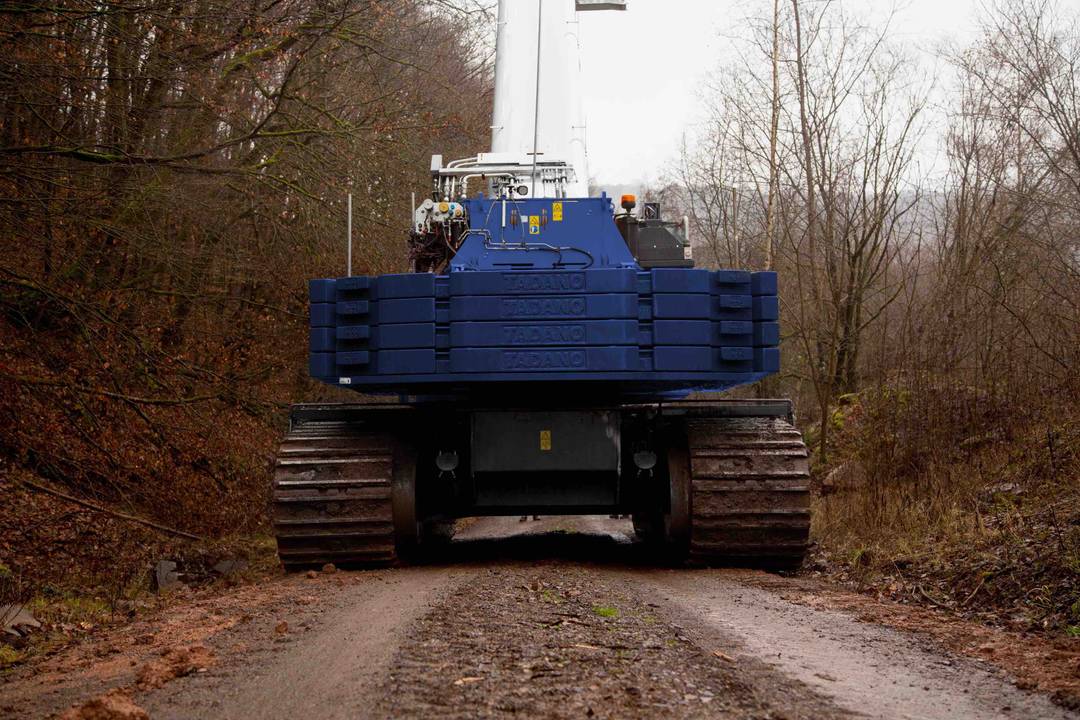 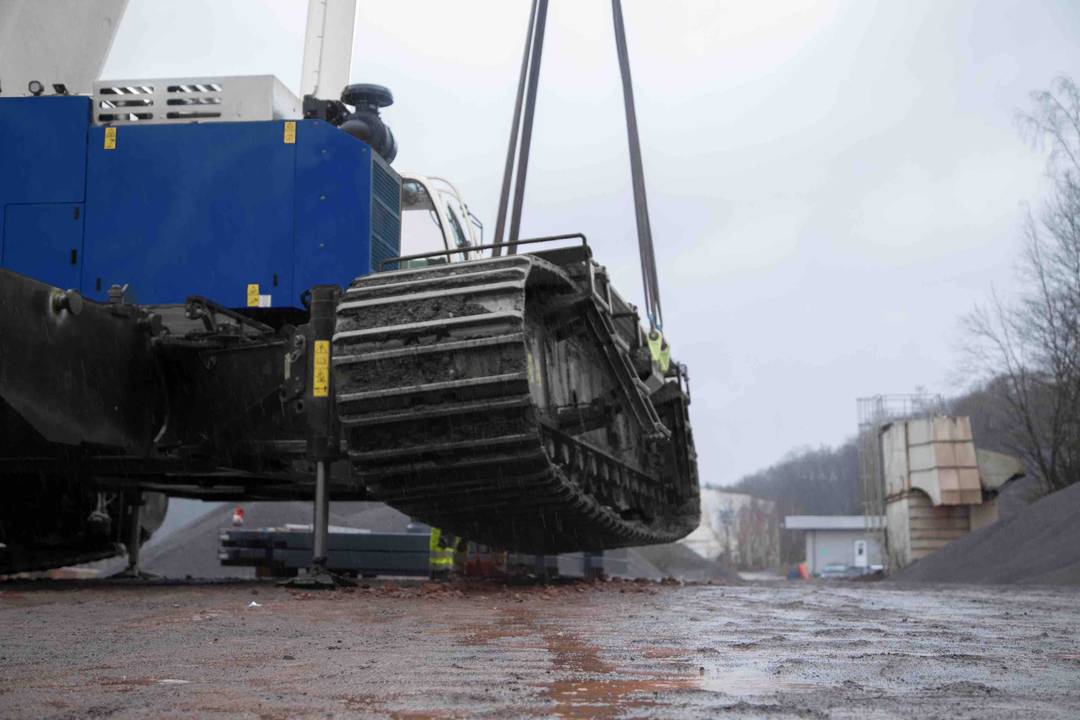 The Tadano GTC-1800EX telescopic boom crawler crane had been developed and built at Demag’s Zweibrücken facility in Germany, and made its concept debut at bauma 2019. Now that Demag is part of the Tadano Group, the crane was recently relaunched as the Tadano GTC-1800EX at Conexpo 2020. It is expected to be available in the second half of 2020.

The GTC-1800EX closes the gap between 130- and 220-t capacity classes. The crane has a lifting capacity of over 150 t and a maximum load moment of 590 meter-tonnes. It has a track width that can be adjusted as necessary in both symmetrical and asymmetrical configurations, so that it can be used for applications in which space is at a premium, such as bridge construction projects.

The crane is also perfect for doing construction work, where it is not only able to move and telescope components, but also luff down and retract the boom and then travel underneath roof structures to get to where it needs to be. In addition, the GTC-1800EX is suitable for use as an assist crane, as well as for carrying out wind turbine pre-assembly work.

Since the load charts for its 60-m-long main boom are excellent even when lifting on inclines of up to 4°, the use of the GTC-1800EX requires less topographical ground preparation on-site than a lattice boom crawler crane, explained Tadano. For example, the GTC-1800EX can lift a full 34 t at a radius of 12 m when working on an incline of 4° with the main boom at a length of 30 m.

The crane’s 60-m main boom length can be increased if necessary. Mian boom extensions with lengths of 5-, 11-, 17-, and 23-m that can be mechanically and hydraulically offset are available, meaning that a maximum system length of up to 83 m is possible. The 5-m extension can be folded onto the side of the main boom for transport to save space.

The GTC-1800EX provides nearly the same manoeuvrability and ease of operation as an excavator with its travel pedals, said Tadano. And the fact that the joysticks can be used to control the tracks complements the machine’s convenient controls. Part of this is feasible thanks to the crane’s outstanding traction force and durable B9HD track components with bolt-on double grouser shoes or flat track shoes.

Such a robust design, which features a powerful travel drive, provides the crane with a traction force of 1,450 kN. This is far higher than that of competitor models in the larger 220-t-class, claimed Tadano, and also allows the GTC-1800EX to turn on a dime under load, even with the narrowest track width. The crane’s gradeability is 50%, maximum travel speed is 2.1 km/h and ground clearance is 420 mm.

There are different track widths with three standard positions of 3.5-, 4.75- and 6-m, as well as the continuously variable track widths, which can also be used in an asymmetrical configuration. The tracks can be adjusted both when stopped and when travelling, while the control system monitors the relevant parameters to ensure the crane remains within an allowable configuration.

The GTC-1800EX is also equipped with an intelligent control system based on the Demag IC-1 Plus control system. It automatically determines the permissible lifting capacity under consideration of a number of factors, such as ground incline, slewing angle, and track adjustment.

The transport width and height of the base crane are 3 m each, making the GTC-1800EX a highly compact machine. The heaviest transport unit weighs 47 t - but if necessary, this weight can be reduced to 42 t by simply removing the extension beams used to adjust the track width. The two crawler units have a gross weight of approximately 18.5 t each when equipped with 1-m track shoes; the two central ballast units weigh 7.5 t each; and the counterweights, including the base plate, weigh 45 t. The maximum operating weight of the crane is just under 150 t.

The crane’s setup operation also emphasises on safety. Since most assembly steps can be controlled with the remote control or from the cab, the rigger does not have to work in the danger zone. Furthermore, most of the couplings are hydraulic quick-connect, which results in fast and efficient work. The crane is fitted with permanently installed outriggers including outrigger pads, which enable the base crane to be conveniently unloaded from a lowbed trailer.

The self-assembly operation of the crane includes the installation of two 7.5-t central counterweights that mount on the carrier, the crawler frames, the 45 t upper counterweight stack on the superstructure and the second hoist.

The accessibility concept of the GTC-1800EX is designed to enable comfortable and efficient work on the crane. This is the case during transport, setup, and operation – even when the tracks are being adjusted as the placement of the permanently installed grating platforms adjusts automatically.

The GTC-1800EX can als be fuelled while on a lowbed trailer, and the cab can be easily accessed during setup in order to start the machine for self-assembly. Permanent ladders and ladder attachment points for the included loose ladder are located strategically around the crane for access to key components during all stages. Plus, there are anchors for a personal fall protection system at the intended ladder support points.

The GTC-1800-EX is driven by an MTU six-cylinder engine with an output of 230 kW and a torque of 1,300 Nm, which complies with Euromot 5 specifications and also Tier 4 Final specifications for the US market. The crane offers two operating modes: Eco mode and Power Boost mode. At a speed of 1,500 rpm, the diesel engine will run in an Eco mode that optimises fuel consumption, whereas at a speed of 1,800 rpm it will have a Power Boost function available. This provides a noticeable output increase and makes it possible to carry out simultaneous movements at high output or speed during crane operation.

The two hoists of the GTC-1800EX also offer an innovative technological feature. The primary and auxiliary hoists are technically identical, with both featuring a 245-m-long, 26-mm-thick, wire rope with a high line pull of 13.9 t. The wire rope’s high line pull makes it possible to lift heavy loads with low reeving, saving time during setup and re-reeving.

According to Tadano, there are good reasons for incorporating the new GTC-1800EX into its brand. First, the Group has a long tradition with these products and a strong line of telecrawlers. As such, the integration is highly relevant and consistent from a technological point of view.

Second, the move is a logical step in terms of corporate strategy. “Our goal is to become ‘One Tadano’. With the first telecrawler produced in Germany and branded by Tadano, this vision is now becoming a reality,” explained Ingo Nöske, director of product management for crawler cranes at Tadano.

He added that this will strengthen cooperation between German and American colleagues within Tadano in the future. The Group can take advantage of the synergies and the ‘best of both worlds’ can flow into the development of new products – as is the case with the GTC-1800EX telecrawler, which has the Demag IC-1 Plus control as well as the IC-1 Remote telematics system technology.

“With the integration of the GTC-1800EX into the Tadano brand, we’re bringing the lone warrior into the family, so to speak,” said Mr Nöske. The situation is different with the AC and CC cranes. These will continue to be marketed under the Demag brand.”