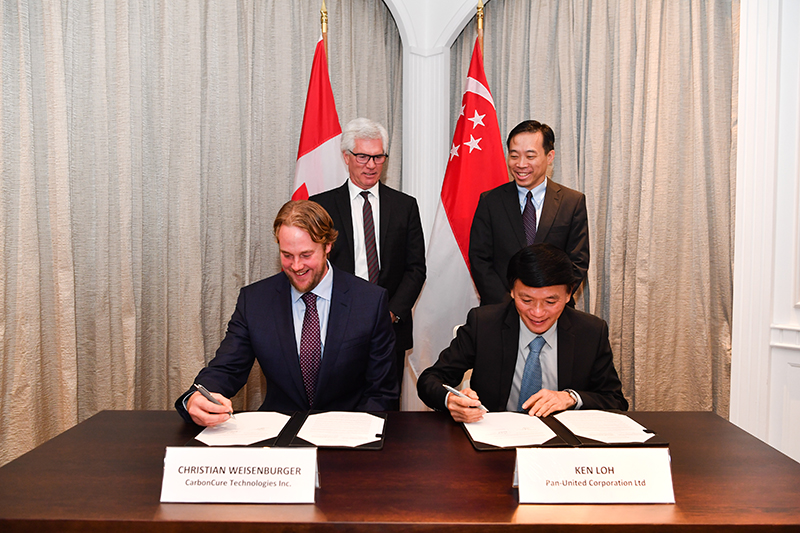 The strategic partnership agreement was signed on 15 November 2018 between Pan-United and CarbonCure.
concretePan-UnitedCarbonCure
Views: 313

It is believed that Pan-United is the first in Asia to use CarbonCure’s product innovation. The company aims to introduce the technology to ready mix concrete producers in Singapore and subsequently to other markets in Asia.

With the CarbonCure Technology, Pan-United has the potential to save over 4,000 t CO2 emissions annually at each of its concrete plants. This is said to be equivalent to the amount of CO2 that would be sequestered by forestland blanketing 2.6% of the total landmass of Singapore.

“Singapore is a vital gateway for CarbonCure’s entry into Asia to further our global efforts to mitigate harmful carbon emissions from the built environment,” said Robert Niven, CarbonCure’s founder and CEO. “We are delighted and convinced that we have a like-minded and strong partner in Pan-United, which is the industry leader in Southeast Asia for advancing green concrete initiatives. Pan-United’s technology capabilities in the concrete and logistics space are second to none in this region.”

CarbonCure is a global leader in carbon dioxide utilisation technologies for the cement and concrete sector. The company is supported by Breakthrough Energy Ventures, a US$1 billion fund created to accelerate the world’s transition to clean energy, whose investors include Bill Gates, Jack Ma, Jeff Bezos and Masayoshi Son, amongst others.

“Pan-United is excited to expand our portfolio of sustainable initiatives with the addition of CarbonCure’s unique breakthrough technology,” said Ken Loh, Pan-United’s executive director. “We view its clean technology as very useful in addressing the urgent climatic need to reduce the global carbon footprint. Pan-United intends to expand the use of the CarbonCure Technology by introducing it to other ready mix concrete producers in Singapore and the region.”

Mr Loh added, “While reducing the overall carbon footprint, we believe this special process has multiple benefits to enable sustainability gains not only for concrete producers and the construction industry, but also for developers in their building projects.

“As a proudly homegrown company, Pan-United seeks to continually set new industry standards in Singapore as well as in overseas markets, and to extend global awareness of our technical capabilities, service standards and product development expertise.”