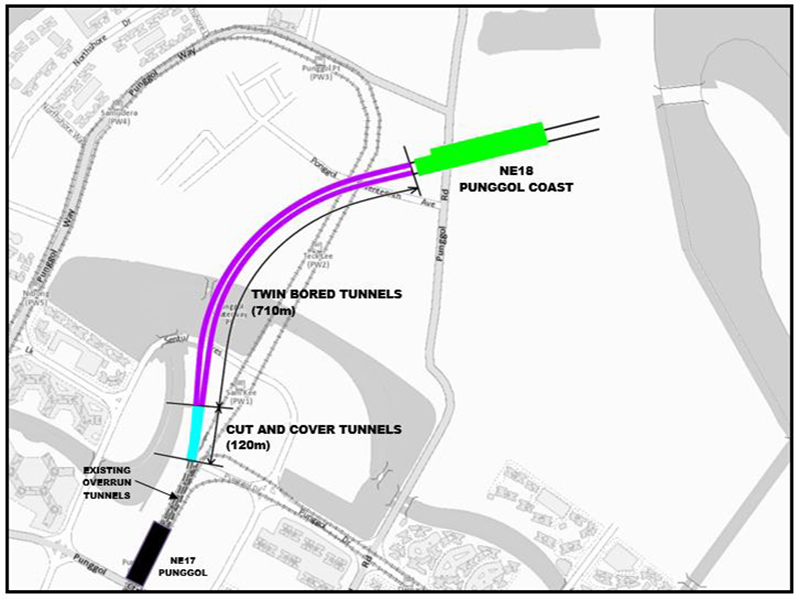 This contract involves the construction of an 830-m tunnels between Punggol and the future Punggol Coast station. Works are expected to commence by this month and complete in 2023. Punggol Coast station will be integrated with JTC's business park in Punggol Digital District. Plans for this new business park development are currently in the design and planning stage, according to LTA.

China State Construction Engineering has completed many railway infrastructure projects in Singapore. These include Downtown Line 3’s Kaki Bukit and Geylang Bahru stations, and the ongoing design and construction of North-South Line’s Canberra Station. The company was also recently awarded two Circle Line 6 contracts for the construction of Cantonment Station, as well as Keppel Station and its associated tunnels in a joint venture with Nishimatsu Construction Co Ltd.

The 1.6 km NELe comprises one station – Punggol Coast station. When completed in 2023, NELe will open in tandem with the first phase of developments at the Punggol Digital District. It will bring rail connectivity to the area and support plans to develop the district into an attractive live-work-learn-play environment for residents, workers and students.

Punggol Coast station will bring the total number of stations on the NEL to 17, including five interchange stations with other MRT lines. NELe will cut down travelling time Punggol North to the city centre by up to 15 minutes, said LTA.