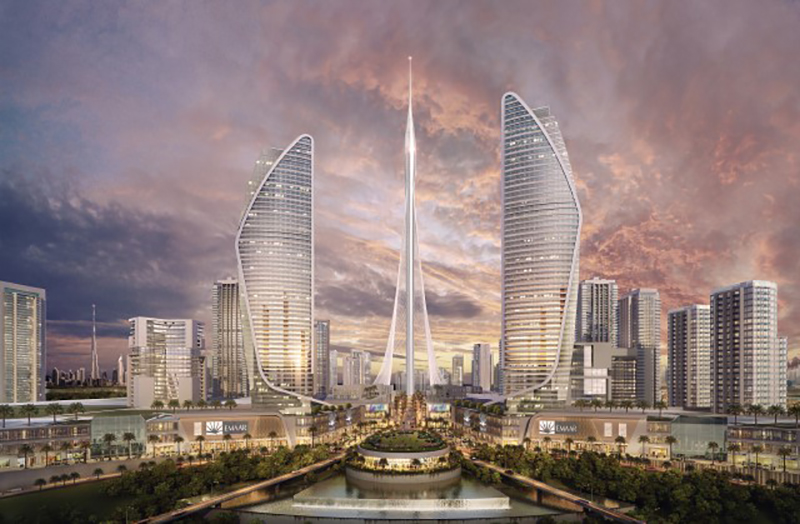 ‘The Tower’ is located at Dubai Creek Harbour.
Views: 96

Work on another iconic development in Dubai has started. Known simply as ‘The Tower’, this new structure is being designed by architect and engineer Santiago Calatrava who is leading its design and engineering work. Mr Calatrava has chosen Aurecon as the engineer/architect-of-record to collaborate with on a range of design and technical features for the project.

“The design is a perfect fit for our requirements and integrates not just design excellence, but also strong environmental and smart-tech considerations. With The Tower, we are delivering a compelling destination that will add long-term economic value to Dubai and the United Arab Emirates,” said Mohamed Alabbar, chairman of Emaar Properties, the developer of the project.

The building’s striking design includes a distinctive net of steel cable stays, which attach to a central reinforced concrete column that will reach into the skies. At the top of the tower is an oval-shaped bud that will house 10 observation decks, including The Pinnacle Room, which will offer 360-degree views of the city and beyond. In addition, there will be numerous balconies that rotate outside the facade of the tower, a boutique hotel and several event spaces. At ground level, The Tower’s Central Plaza will serve as a bustling neighbourhood centre.

Design work for the project is already underway. Timing is one of the biggest challenges on the project and will call for close collaboration from all stakeholders. The Tower is planned to be completed in a period of approximately four years, so creating an efficient design and construction schedule will be vital. Aurecon has assembled its top global experts to contribute to the project, with work being led by the company’s Middle East office with input from offices in Africa, Asia and Australia.

Dr Andy Davids, Aurecon’s Tall Buildings leader, who serves as Aurecon’s director of dsign on the project, said that optimising proven techniques and materials is fundamental to the project’s success.

“One of the secrets with courageous projects is not to use new techniques or materials, but to stick with what you know,” explained Dr Davids. “At the same time, we must work to maximise the potential of those materials and techniques. What’s different in The Tower is that we’ll be pushing the use of these techniques beyond current norms to create something unparalleled, and for us that’s very exciting.”

“The Tower will test the craftsmanship of Aurecon as we play our part in making a mark on the built fabric of mankind,” added Adrian Jones, Aurecon’s project director for The Tower.

Mr Calatrava also designed the tower with a strong focus on energy efficiency and sustainability, including a highly efficient cooling system to mitigate the region’s hot climate. The water collected from this system will also clean the structure’s facade, for example. Elegant landscaping and vegetation on and around the tower will encourage solar protection. An integrated shading system and wing doors will contribute to its energy efficiency as well.

The iconic Calatrava design was selected from six proposals that were submitted by top global architectural firms. It is influenced by the natural forms of the lily, evoking the shape of a minaret – a distinctive architectural feature in Islamic culture. It combines modern, sustainable design with the rich culture and heritage of the United Arab Emirates.

Located at Dubai Creek Harbour, The Tower is scheduled to open in mid-2020 to celebrate the start of Expo 2020 in Dubai.

The surrounding area of Dubai Creek Harbour is planned to become a 6 sq km development that incorporates world-class master-planning. It will cover an area twice the size of Downtown Dubai and be located just 10 minutes from Dubai International Airport. The waterfront development is centred at Dubai Creek – one of the most significant points in the history and culture of Dubai – and in close proximity to the Ras Al Khor National Wildlife Sanctuary.