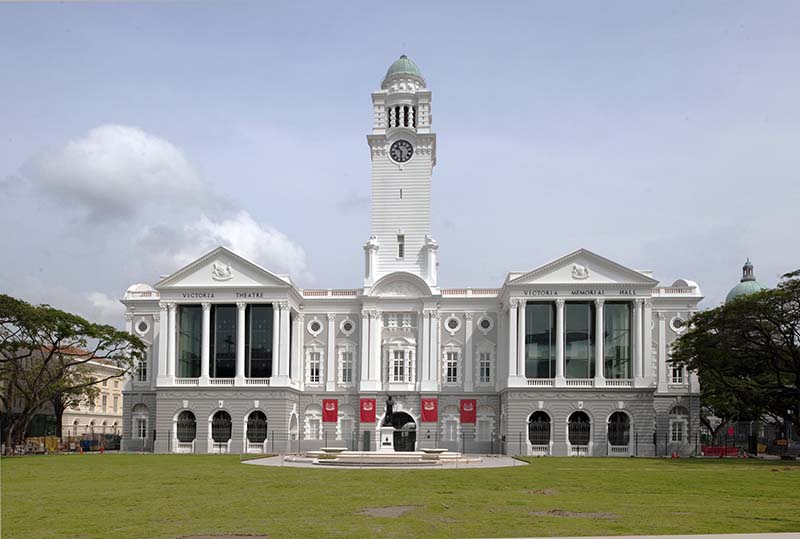 Singapore’s Victoria Theatre and Victoria Concert Hall restoration project has been awarded a 2015 Urban Redevelopment Authority (URA) Architectural Heritage Award. The Victoria Theatre was built in 1862, and the Victoria Concert Hall in 1905. Improvements to the buildings have made these major cultural and architectural landmarks newly relevant and resplendent, adding to their aura of Neo-Classical grace and grandeur.

T.Y. Lin International Pte Ltd (TYLI) was responsible for the civil & structural (C&S) and mechanical & electrical (M&E) design of the project for the National Arts Council (NAC). TYLI, working in conjunction with NAC, developed a preservation scheme to overcome technical challenges associated with protecting the aesthetic features of the heritage structure and upgrading it to modern day standards.

Restoration of the complex included the excavation and construction of two basement levels within the conserved theatre facade walls that were founded on shallow brick pedestals. One of the key structural challenges in delivering the restoration works was to underpin part of the theatre facade wall, to enable the basement structure to extend under the Old Parliament Lane and the Atrium area. The old foundations of the conserved structures were strengthened in order to transform both spaces into modern facilities to cater for world-class performances.

The 2015 URA Architectural Heritage Awards presentation ceremony was held on 19 October 2015 at the Victoria Theatre and Concert Hall. “We are truly honoured to have been involved in preserving Singapore’s built heritage through the restoration of Victoria Theatre and Victoria Concert Hall. It is particularly fitting that the awards ceremony is held at the venue, allowing for the careful and sensitive restoration work to be showcased,” said Teh Hee Seang, chairman of TYLI Singapore. “The project was technically challenging and demanded great coordination, team work as well as extensive civil and structural engineering skill and expertise to facilitate the additions and alterations while minimising impacts on the preserved historic structures. It is a great honour for the project to receive the URA Architectural Heritage Award recognising our efforts and the efforts of the whole team.”

The annual URA Architectural Heritage Awards competition, now in its 21st year, was introduced to accord recognition to owners, professionals and contractors of buildings with preservation and conservation status in Singapore, which are well-restored and/or exhibit architectural/urban design excellence. The awards serve as an incentive to professionals to pay particular attention to high-quality restoration, and innovative and sensitive new additions and alterations to conservation buildings. It also provides a platform for benchmarking high-quality preservation or conservation buildings.

*Winners of the URA Architectural Heritage Awards 2015 will be published in the Jan/Feb 2016 issue of SEAC.

*Detailed information on the Victoria Theatre and Victoria Concert Hall restoration project is featured in the Jan/Feb 2015 issue of SEAC (page 64): http://issuu.com/southeastasiaconstruction/docs/seac_janfeb2015