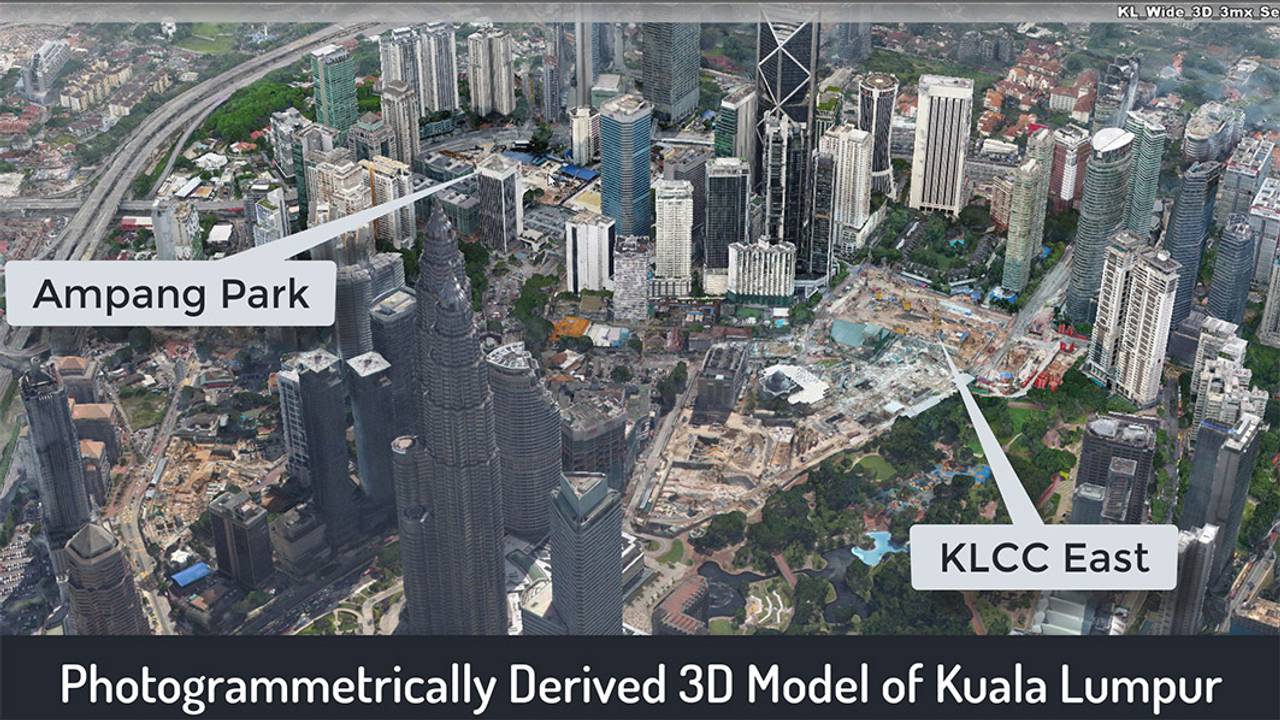 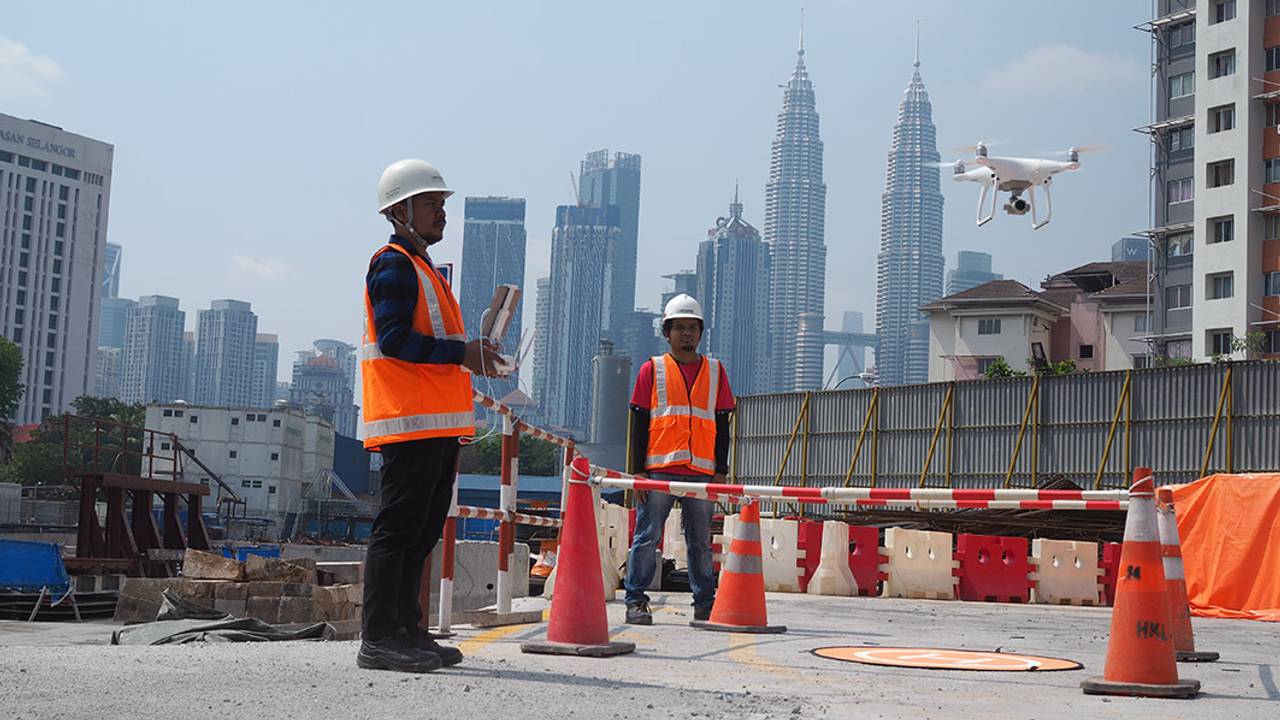 The Sungai Buloh-Serdang-Putrajaya (SSP) metro line is part of Malaysia’s Klang Valley Mass Rapid Transit (KVMRT) rail network to reduce traffic congestion and improve public transportation in Kuala Lumpur. Running through dense urban areas of the capital city and its southern suburbs, the SSP line will serve approximately two million people with an expected daily ridership of 529,000 passengers. The 52.2-km-long alignment consists of 38.7 km of elevated track, 13.5 km of underground track, and a total of 35 stations.

MMC Gamuda Joint Venture (MMC) is the turnkey contractor, focusing on the underground works that include constructing twin-bored tunnels for the length of the underground track and 17 individual construction sites, the largest exceeding 17,000 sq m.

The need for reality capture solution

MMC capitalised on UAV capabilities to acquire large volumes of data at extraordinary speeds and share it through cloud-based platforms for multiple BIM and GIS applications. The team used these capabilities for tasks that included site progress monitoring and reporting. While manual surveys take an average of 200 hours with limits on the amount of data collected, UAVs can collect hundreds of overlapping photos in less than an hour and then process them in just half a day per site using ContextCapture.

Using Bentley’s reality modelling application, MMC derived a 3D photogrammetric model of Kuala Lumpur, assembled from the UAV-captured images, to establish a digital context for each construction site within a broader perspective of the city. With predetermined flightpaths at varying elevations and good ground control points (GCPs), UAVs were able to capture accurate georeferenced images along the tunnels’ alignment between Chan Sow Lin and Bandar Malaysia North stations. The images were processed using ContextCapture to generate a 3D reality mesh that enabled precise positioning of the tunnel boring machines in relation to aboveground structures.

Using 3D reality meshes, the team performed 4D analysis of the construction site to measure on-site progress with different surveys at different points. They shared the construction progress with the client using a 3D visual model. While a traditional time-lapse photo from a fixed camera provides a good visual record, it cannot be used for surveying or measuring, unlike 4D. Accurate reality models provide real-world digital context to digital twins that facilitates 4D construction monitoring, as well as enables visualisation and analysis of excavation, tunnel boring assembly and launch, and permanent structure construction.

Extending the application of reality modelling

Using 3D reality meshes facilitated construction planning and progress monitoring. Given the accuracy, interoperability, and reliability of models generated with ContextCapture, MMC expanded the scope of reality modelling to include design review verification, measurement, and safety enhancement. As part of its new reality capture workflow, the team integrated the photorealistic models into MMC’s federated BIM design models to enhance constructability.

At the Chan Sow Lin station, the team used the ContextCapture survey model to verify that the concrete slabs were located correctly on site. “We took the ContextCapture model and overlaid it with the BIM model to see that the geometry of the actual structure matched the design,” explained Ronan Collins, head of project information management at MMC. The interoperable ContextCapture models facilitated integration with the BIM models that were created with third-party software, significantly enhancing designers’ understanding of site constraints and context.

When driving tunnels, it is extremely important to know what existing structures need to be accommodated. The flexibility of Bentley’s reality capture solution allowed the team to overlay the orthoimages of the Conlei Station site with printed records, revealing a discrepancy. Where printed records showed that there was an empty pathway, reality models of the site revealed that a substantial and undocumented structure existed. Using reality modelling provided MMC with an accurate digital representation of where to plot the tunnel that otherwise would not have been known until the on-site tunnel works began.

The 3D reality models were also used extensively for measuring and quantification to save considerable time. By surveying and modelling the piling works at the Chan Sow Lin station, MMC could quickly and accurately measure the length of a secant pile wall. The team also used ContextCapture to determine precise cut-and-fill volumes. By marking a boundary in the 3D model to represent a 28-m-long platform for the station, the team was able to digitally set a measurement plane and density points to more accurately determine the exact volume – which, in this case, had the effect of reducing the amount of cut-and-fill from 11,300 cu m to 9,800 cu m – to form a platform at this location.

Lastly, safety is paramount at MMC, and the organisation used its newly implemented reality capture workflow to mitigate risks for on-site personnel. After a landslide occurred at one of the construction sites, the survey team sent in UAVs to inspect the area. Using ContextCapture to take measurements from the captured images of the area enabled MMC to determine the amount of concrete material that required removal, and where temporary works needed to be installed for remediation. The reality capture solution eliminated the need to send personnel on site and, therefore, any risk of injury.

“There’s no point in having all these models if no one knows they exist,” said Mr Collins. Democratisation of the models and information was crucial to the workflow. MMC established an open, connected data environment (CDE) using ProjectWise, recognising the software’s interoperability to grant all project members quick and convenient access to the 3D survey models. MMC created a portal that provides direct access to ProjectWise, allowing users to launch a web browser and view any 3D model of interest. Integrating ProjectWise with cloud-based applications to share and distribute the models with all project members simplified access and review of the most current site conditions.

With so many active sites distributed across such a wide area, it is impossible for senior staff and decision makers to visit each location on a regular basis. Working in a connected data environment and delivering the models online democratised access to site survey models and data, providing regular visibility of the sites at any time without the need for extensive site visits. Having all reality models and information available via ProjectWise allows decision makers to remotely see what is happening on site. Bentley’s connected data environment and reality capture solution saved over 1,000 resource hours for MMC surveyors, engineers, and project managers.

Keeping a bird’s-eye view on the future

While an exact return on investment is impossible to measure, it is estimated that MMC’s reality capture workflow has improved productivity 30 to 50 times compared to traditional survey methods. The successful use of UAVs, ContextCapture, and ProjectWise on the SSP metro line project has inspired MMC to explore new and exciting ways to use the survey-captured data and 3D reality models. The survey team has already initiated reality capture for public relations. Streaming a UAV video of the first tunnel boring machine breakthrough and major project milestone on MMC’s social media channel provided the public with a bird’s-eye view of the tunnelling works, live online.

Using transformative technology that will be invaluable for the remainder of this project and all MMC future projects, the organisation is committed to using Bentley’s reality capture solution to continuously improve site safety, construction, surveying, and productivity. MMC is already mapping out new initiatives to extend the scope of UAVs, keeping an eye on future applications for reality modelling. The company’s innovative digital survey workflow is “becoming business as usual for MMC Gamuda, and that’s a real testament to both the ease of use and value that ContextCapture provides,” said Mr Collins.