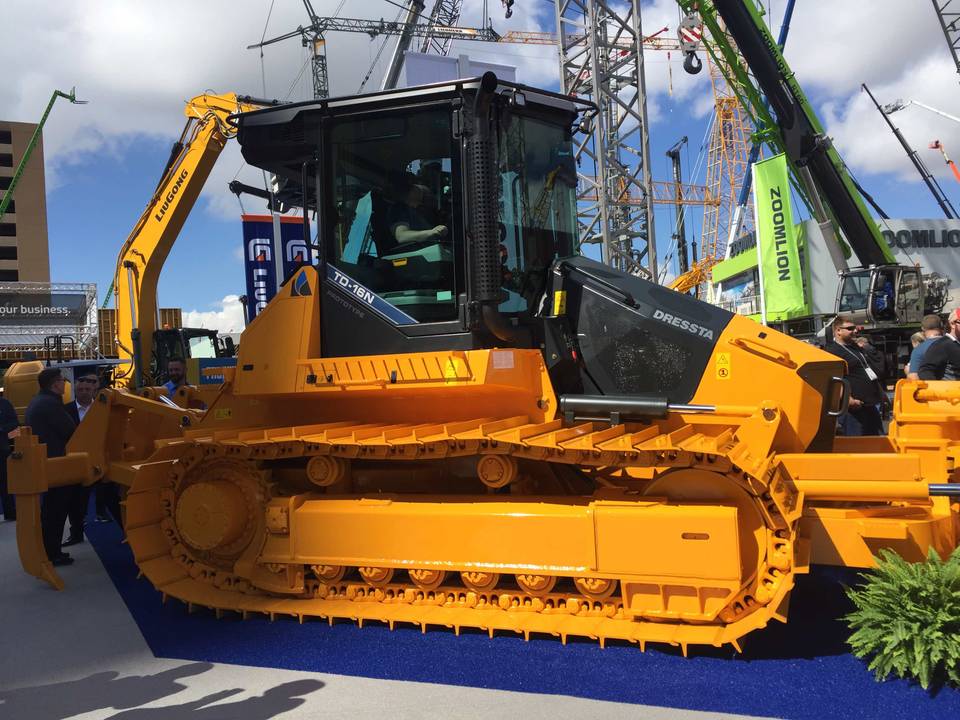 Dressta has developed a revolutionary dozer that sets a new benchmark for visibility, the TD-16N. This machine features a mid-cab design over a mid-mounted automatic, dual path hydrostatic drive train. It comes with a standard six-way angle blade and is compatible with 2D and 3D grade control systems.

The TD-16N has an operating weight of 19,090 kg and net horsepower of 170 hp. Controls are easily accessible, intuitive, and easy to use thanks to the electro-hydraulic joysticks.

“We literally started with the operator, the blade and the tracks and then built everything around them without compromise. The result is a dozer with unrivalled all-round visibility encompassing 309 degrees,” explained Edward Wagner, executive director of new technology at LiuGong.

“We set out to create the best visibility in class – I think we’ve achieved that, but the real test is to put a seasoned operator in a cab and ask him,” said Gary Major, executive director of industrial design at LiuGong.

A select group of operators was invited to preview and test the TD-16N. One of them was an Irish operator, Neil John Mckeown, who was clearly impressed. “It’s like sitting without a cab – you have the visibility right round you,” he said.

“The visibility is second to none. Floor to ceiling glass, no obstructions, you can’t do better than that,” added Rob Winmill, an American equipment owner and dealer.

The Dressta TD-16N dozer is also versatile, thanks to its undercarriage design that utilises a single-track gauge for all track shoe widths. This allows the machine to be reconfigured at any point in its life, from standard to LGP undercarriage, by simply just changing the track shoes and the blade. Such a feature increases versatility and will improve resale values by allowing future owners to reconfigure the machine to perfectly match their needs.

Another priority when designing the TD-16N is its operator safety. “Every operator out there has a story about falling off the tracks. This is the first machine where you don’t have to get onto the tracks,” said Mr Major.

Firstly, the design team designed non-slip steps at the rear of the machine totally negating the need to step onto the tracks. Complete with safety handrails, these steps allow easy access to and from the cab with three points of contact maintained at all times. The TD-16N is believed to be the only dozer in its size class with this type of ‘no tracks’ access.

Secondly, the design team ensured that all access points for daily checks, maintenance and fuelling were reachable from ground level. “The steps up the back give really easy access – good idea!” delighted Mr Mckeown. “Daily checks are perfect, you don’t have to go on to the tracks, it’s all done from the ground.”

Howard Dale, chairman of Dressta said, “Everything we do, we do to make our machines deliver more. The superior visibility of this machine will certainly help operators be more productive and do a better job in less time. We also know that this machine will make the worksite safer for everyone. The easy access for daily checks and maintenance is going to reduce downtime and ensure that this machine keeps working and delivering.”

The Dressta TD-16N has been named a winner of Red Dot Product Design Award 2020 - following on from the success of LiuGong 4180D motor grader, which won the same award in March 2019.

“As with our previous award-winning motor grader the 4180D, we set out to create the best visibility in class with the TD-16N,” said Mr Major. “I think it's also true to say that benchmark visibility is becoming one of the defining characteristics of our design ethos. We know how important visibility is, not only for safety, but for productivity and operator satisfaction too.”

“It's a great honour to win back-to-back Red Dot Awards,” said Mr Dale. “It’s an unbelievable achievement that underlines the amazing work Ed, Gary and the whole design team do every day. I think it says a lot about how far we have come as a business and where we are heading. Chinese manufacturers are not usually known for design but our growing reputation for design excellence is making the industry sit up and take notice. Our investment in R&D has reached new records and we are making giant leaps in intelligent and connected machine technology.

Mr Dale continued, “Two Red Dot Awards are fantastic but they are only the start of our story, we are on an upward trajectory. I’m convinced that the industry will see that Dressta offers something really different in the market - cutting edge design as standard.”

The LiuGong Dressta design team will receive the award on 22 June 2020 and the Dressta TD-16N dozer will join the LiuGong 4180D motor grader in the Red Dot Hall of fame.