Phase 1 of the project would bring drinking water to more than 500,000 people in Phnom Penh. (Image: Vinci) 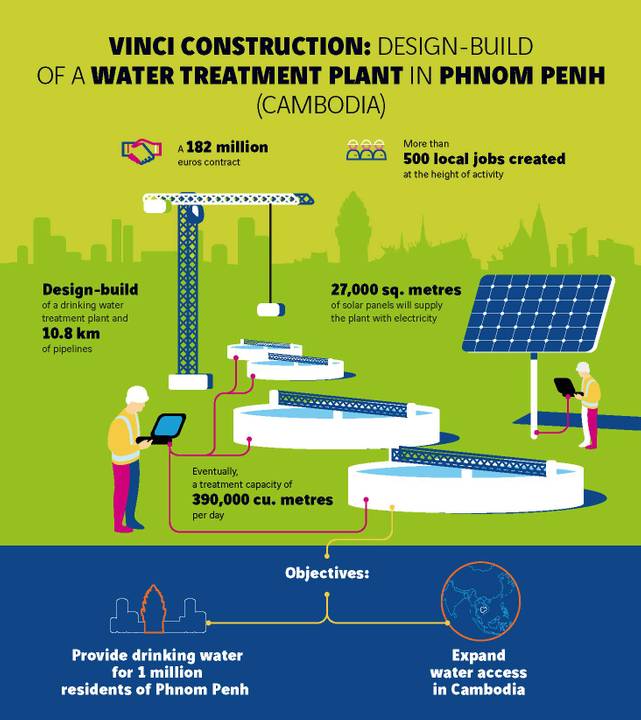 Vinci Construction Grands Projets has signed a contract with the Phnom Penh Water Supply Authority to design and build the Bakheng water treatment plant, located in the northern outskirts of the Cambodian capital.

The first phase of the project, totalling US$155 million (€141 million), covers the construction of several elements. These include: a first treatment line with a capacity of 195,000 cu m/day; the intake in the Mekong River with a capacity of 390,000 cu m/day; two 1.4-m-diameter pipelines with a length of 1.5 km to carry water from the Mekong River to the treatment plant; and a 2-m-diameter pipeline with a length of 7.8 km (including a 630-m river crossing to be built using a microtunneling machine) to bring drinking water to more than 500,000 inhabitants of the capital city.

To minimise the plant’s carbon footprint, its electricity requirements will be partly supplied by 27,000 sq m of solar panels with 3.8 MW installed capacity, said Vinci.

The project, co-financed by the French Development Agency, the European Investment Bank and the Phnom Penh Water Supply Authority, is expected to employ more than 500 local workers and supervisory personnel at the height of activity.

According to Vinci, the contract provides for a second conditional works phase with a value of US$45 million (€41 million). This phase is designed to double the plant's treatment capacity to 390,000 cu m/day. Following the handover of the second phase, the project will provide drinking water for a population of one million.

This new project confirms Vinci Construction Grands Projets’ commitment to expanding drinking water access in Cambodia. In 2017, the company handed over the Niroth drinking water plant on the outskirts of Phnom Penh and the wastewater treatment plants at the Phnom Penh and Siem Reap airports. This year, the Vinci Construction Grands Projets hydraulic engineering teams also delivered two drinking water plants in Siem Reap and Chamkar Mon (in the centre of the Cambodian capital).