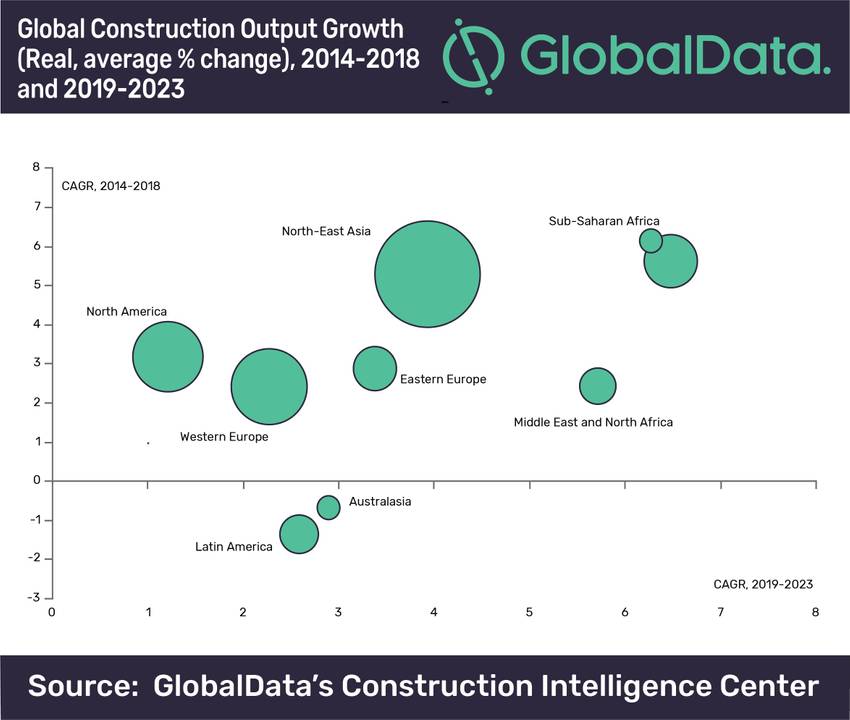 The pace of global construction output growth is expected to pick up marginally in 2019, reaching 3.4% from 3.2% in 2018, before rising to 3.5% in 2020, according to a leading data and analytics company GlobalData.

Based on GlobalData’s latest report, ‘Global Construction Outlook to 2023 - Q1 2019 Update’, the improvement is entirely due to growth acceleration in construction activity in emerging markets, most notably in China, where the authorities are stepping up investment in infrastructure to prevent a continued slowdown. However, growth in China will drop back from 2021 onwards, and this will contribute to a slight easing in construction growth in emerging markets.

“The expansion in advanced economies will be fairly sluggish in 2019, with growth in North America slowing to 1.2%, and in Western Europe there will be a deceleration to 2.3%. However, over the remainder of the forecast period, there will be scope for slightly faster growth in the advanced economies, with monetary policy remaining accommodative, which will contribute to overall global construction growth,” said Danny Richards, lead economist at GlobalData.

The pace of construction growth will ease in South and Southeast Asia in 2019 following the sharp upturn in 2018, but it will be the fastest growing region in 2019-2023 with an average annual growth of 6.5%, revealed GlobalData. There will be sustained recoveries in construction output in the Middle East and Africa, as well as in Latin America. However, weakness in Turkey will pull down the pace of regional expansion in Eastern Europe.

Mr Richards added, “Risks to the overall forecast stem primarily from a possible escalation in the trade war between the US and China, which would ultimately impact on investment and constrain global economic growth. There is also a risk that China could overstep its efforts to support the economy, resulting in an unmanageable debt crisis, which would disrupt investment trends globally, most notably via the impact on demand in commodities markets.”

GlobalData further highlighted that construction activity growth slowed across Western Europe in 2018, and output will expand by 2.3% a year on average in 2019 - 2023, which is a marginal slowdown compared to the pace recorded in 2014 - 2018, of 2.4%. The expansion in the UK is subject to major downside risks in the face of uncertainty relating to the outcome of its exit from the EU.