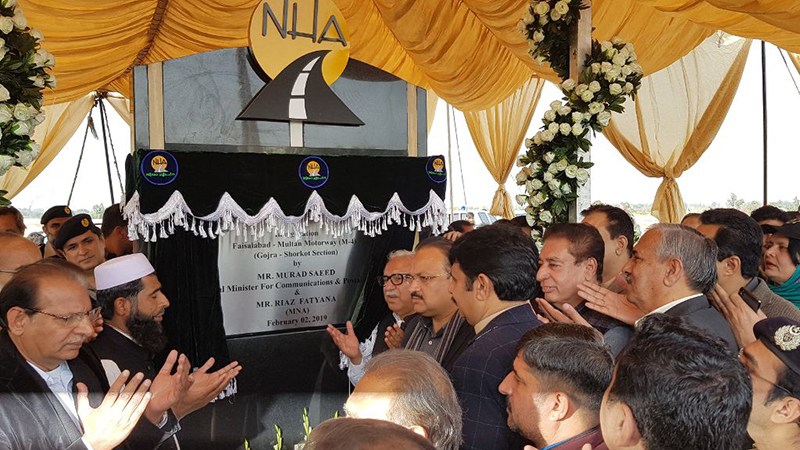 The Gojra–Shorkot section of the National Motorway M4 in Pakistan has been officially opened. It was built with the support of the Asian Development Bank (ADB) and the Department for International Development (DFID) of the UK under the Pakistan Economic Corridors Program to promote regional trade, tourism and economic growth in the country.

ADB provided US$178 million in financing for the four-lane, access-controlled 61-km motorway, while DFID provided US$92 million in grant financing. The project is part of the Pakistan Economic Corridor Program to upgrade highway networks connecting the country’s southern and northern parts, helping to improve road links between Pakistan and the neighbouring Central Asian countries as well as China.

“The new road will unlock trade and agribusiness potential for millions of people in the Gojra, Shorkot and adjoining area that will bring many smaller cities and towns in a more efficient transportation loop. It will also provide people better access to basic facilities including health and education,” said Xiaohong Yang, ADB country director for Pakistan. “The new section of the motorway is a step forward in Pakistan’s expanding high quality roads to facilitate improved north-south connectivity and to help position the country as trade, tourism and industry hubs.”

“The new motorway will provide safe and faster transport to people and ease heavy traffic on the existing roads in thickly populated areas around Shorkot,” said Joanna Reid, head of DFID Pakistan. “UKAid is pleased to be part of this important road project and we hope this will help farmers to transport their produce from farm to market faster and cheaper, improving their productivity and prosperity.”

The Faisalabad–Gojra’s 58.2 km section, which has also been completed with ADB support, is now open for traffic. The opening of the Gojra–Shorkot section will further shorten travel costs and time for people and goods moving from and towards southern Punjab. Meanwhile, the 65.28 km Shorkot–Khanewal road section, which is co-financed by ADB, DFID and the Asian Infrastructure Investment Bank, is now under construction.

Once completed, the M4 will connect Faisalabad with Multan and ultimately will provide an efficient transport corridor link between the northern part of the country with the port cities of Karachi and Gwadar. It will also link up these cities with the existing networks of national motorways M1, M2 and M3, shortening the distance between South Punjab with central and northern urban and business centres including Lahore, Islamabad and Peshawar.