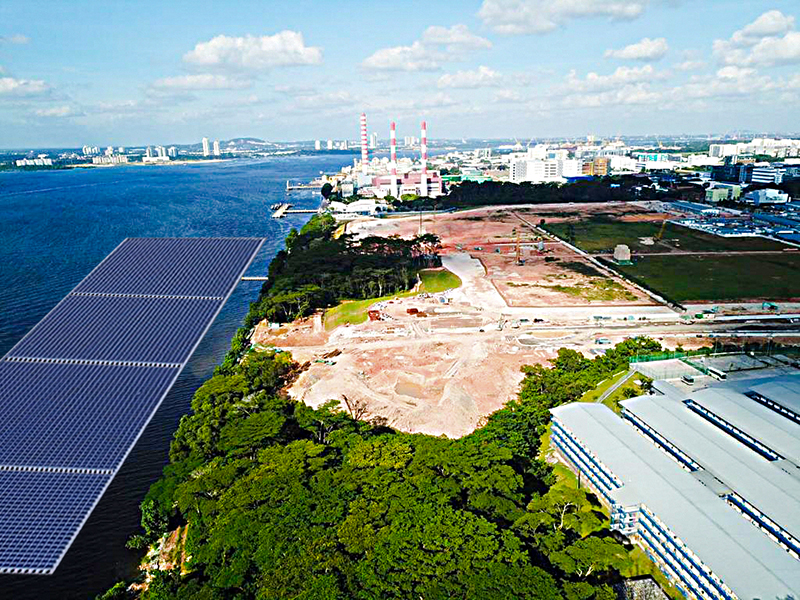 An artist’s impression of the offshore floating photovoltaic (OFPV) systems to be built in Singapore by Sunseap, located north of Woodlands Waterfront Park, along the Straits of Johor.
Views: 106

Sunseap Group, a leading sustainable energy provider in Southeast Asia, is developing one of the world’s largest offshore floating photovoltaic (OFPV) systems in Singapore, to be located north of Woodlands Waterfront Park, along the Straits of Johor.

Supported by the Singapore Economic Development Board (EDB), the 5 MWp (MegaWatt-peak) floating solar system is expected to generate about 6,388 MWh of renewable energy annually, once completed – it is equivalent to powering about 1,250 four-room flats - with a reduction in greenhouse gas emissions of about 2,600 t per year, over the next 25 years and beyond.

While most large-scale floating PV systems are built on freshwater ponds, lakes or reservoirs, Sunseap’s latest is one of the largest sea-based PV projects. “Sunseap is excited to embark on this landmark project, which demonstrates Sunseap’s engineering capabilities in research and development. Our floating solar system supports Singapore’s ambition to be a solar hub for Asia, and we hope it will ignite more deployment of alternative methods of tapping solar energy,” explained Frank Phuan, co-founder and CEO of Sunseap Group.

Mr Phuan highlighted that in land-scarce countries like Singapore, the widespread use of PV systems is hindered by space constraints and limited roof space. The successful delivery of this project is important in opening up similar opportunities for sea-based floating PV systems in Singapore and the region.

Rob Khoo, VP of marketing communications at Sunseap Group added, “Solar energy is a key renewable energy source in Singapore and Sunseap is constantly innovating and exploring more efficient ways to deploy cutting-edge technologies that will help us protect the environment for future generations.”

“Solar is one of the most viable and sustainable clean energy options in Singapore, and we continue to see innovative solar solutions being developed and deployed here,” said Damian Chan, executive director of energy, chemicals & materials at EDB. “Beyond contributing to Singapore’s energy security and climate change commitments, Sunseap’s offshore floating photovoltaic system will help the clean energy ecosystem and build new, exportable capabilities for potential scale-up across the region.”

Sunseap has previously participated in the world’s largest floating PV test-bed in Singapore at Tengeh Reservoir. According to the company, results so far show that the floating PV systems perform better than typical rooftop solar PV systems in Singapore, due to the cooler temperatures of the reservoir environment.

The 5-ha OFPV pilot in Woodlands is expected to be commercially operational early next year. This builds on Sunseap’s experience with freshwater systems in reservoirs and is expected to produce similar benefits.