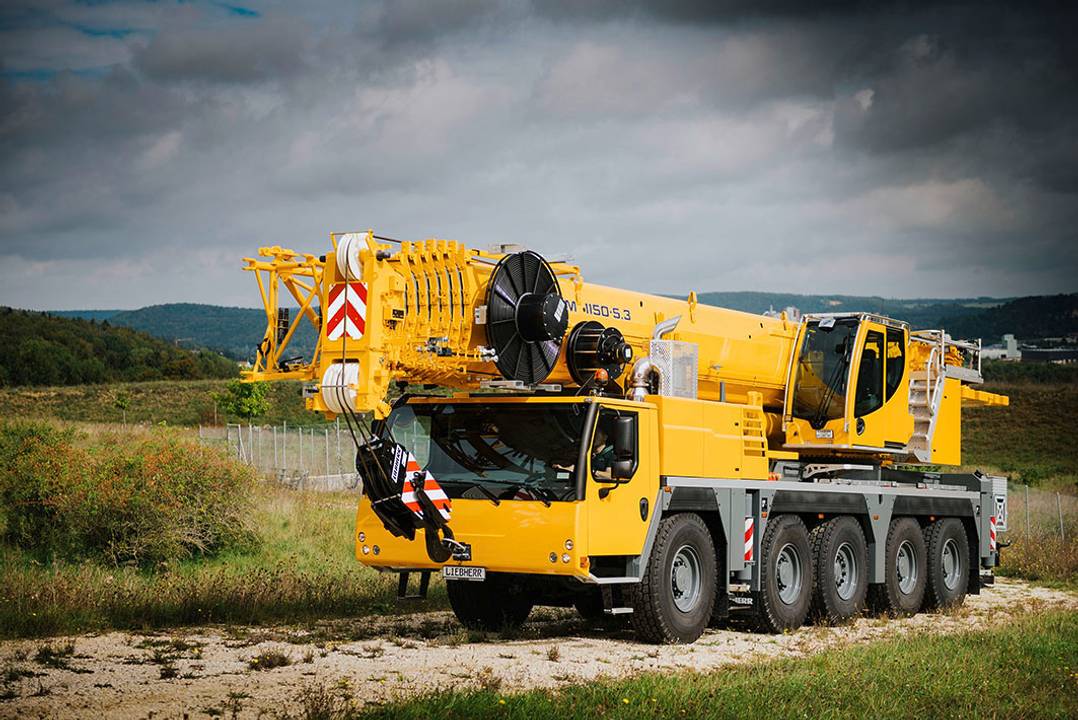 After the launch of its LTM 1120-4.1 in March, Liebherr is now introducing the second development in its all-terrain crane range - the LTM 1150-5.3. Described as ‘The jewel in your fleet’, this new model has a maximum lifting capacity of 150 t and telescopic boom of 66 m. It is intended to replace its predecessor, the LTM 1130-5.1.

“A flexible all-rounder, the LTM 1150-5.3 will enhance any crane fleet like a jewel – It has the longest boom in this crane class at 66 m and can compete with crane models in the 200-t lifting capacity class,” explained Christoph Kleiner, sales director at Liebherr. “It delivers outstanding lifting capacities when fully raised and at large radii. And it is immediately ready for use once it reaches the site. This is because the new 150-t crane carries 9 t of a ballast with a gross weight of 60 t.

“That means it can complete lots of jobs without requiring additional ballast transport vehicles. That saves time and money, and makes the crane even more valuable to crane contractors – hence our slogan, ‘The jewel for your crane fleet.’”

Compared with its predecessor, the telescopic boom on the new LTM 1150-5.3 is 6 m longer. At the same length of 60 m, the new five-axle crane can hoist 12 t when fully raised – 1.5 t more than its predecessor. When fully extended to 66 m, the crane has a lifting capacity of over 9 t. As a result, it is ideal for erecting tower cranes and radio masts.

Lattice extensions enables the LTM 1150-5.3 to achieve hook heights of up to 92 m and radii of up to 72 m. For this, a 7-m lattice section as boom extension and a 10.8- to 19-m double folding jib are used. The latter can be adjusted hydraulically between 0° and 40°. A 2.9-m erection jib and a runner, which can be swung to the side, round off the equipment list. The lattice jibs are compatible for many crane models in the 100- to 180-t-class within the Liebherr portfolio.

The six-cylinder Liebherr diesel engine in the undercarriage provides all the drive power the LTM 1150-5.3 needs. It develops 400 kW and a torque of a 2,516 Nm.

The engine satisfies the new stage V emissions directive, but can also be configured to comply with the regulations in countries outside of Europe, such as Tier 4 for the US and Stage IIIA for low regulated countries.

The ZF-TraXon gearbox is used to transfer the power to the crane’s axles. ECOdrive is economical and convenient, while Hillstart Aid makes starting on gradients easier.

Liebherr has continued its single-engine strategy on this crane with a mechanical drive unit for the superstructure. The weight reduction created by the elimination of the superstructure engine from the previous model is adopted to deliver a longer boom and more lifting capacity.

The LTM 1150-5.3 also features ECOmode to reduce fuel consumption and emissions of both noise and CO2. Firstly, the complete pump drive can be disconnected automatically when the engine is idling and then reconnected quickly by the intelligent controller when it is required. Secondly, the crane controller automatically calculates the perfect engine speed for the working speed selected using the control lever to avoid unnecessarily high engine speeds.

Hook blocks have to be heavy to ensure that the hoisting winch spools reliably; yet, they should be as light as possible for being transported on the crane and for high net loads during hoists. Liebherr has designed a new range of hook blocks to satisfy these requirements – weight plates are attached to both sides of the hook block to change the weight of the block so that it is suitable for the current situation. Mr Kleiner said, “Our engineers have produced a simple, but brilliant design as it means that operators can react even more flexibly to every job.

“For instance, a 3-roller hook block, which previously has weighed 700 kg in this crane class, now only weighs 500 kg, but can be upgraded to 700 kg quickly and easily when necessary. The new system is available for 1 to 7-roller hook blocks. These can be used on cranes with both 19 mm and 21 mm ropes. The weights can be interchanged to ensure simple handling.”