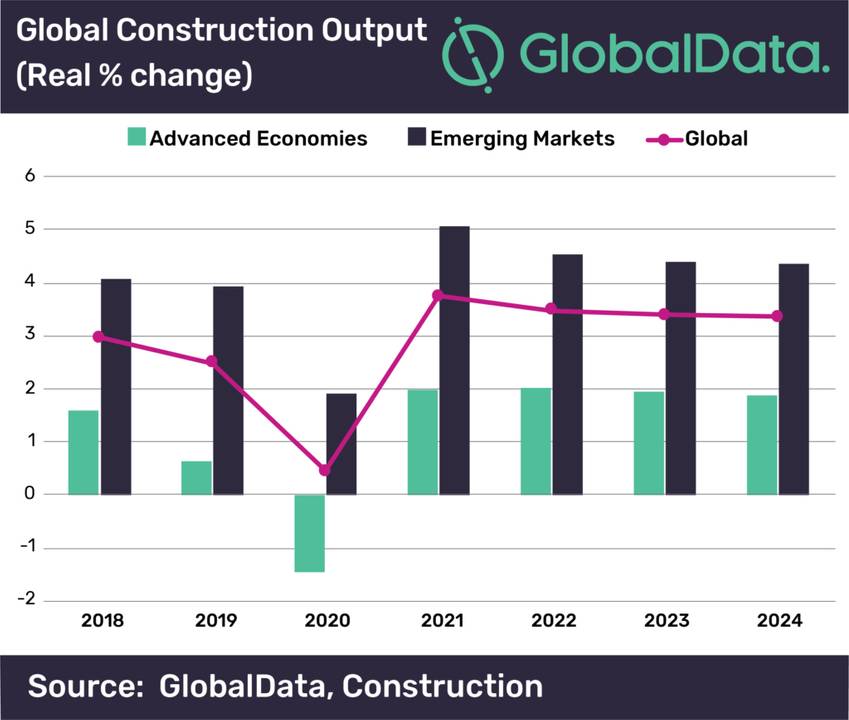 Prior to the Covid-19 outbreak, data and analytics company GlobalData had predicted that there would be an acceleration in the pace of growth in the global construction industry, but given the severe disruption in China and other leading economies worldwide following the outbreak, the forecast for growth in 2020 has now been revised down to 0.5% (from 3.1% previously).

The current forecast assumes that the outbreak is contained across all major markets by the end of the second quarter, following which, conditions would allow for a return to normalcy in terms of economic activity and freedom of movement in the second half of the year. However, there will be a lingering and potentially heavy impact on private investment owing to the financial toll that was inflicted upon businesses and investors across a wide range of sectors.

While growth in 2021 will be marginally higher than previously expected because of the projected rebound (and high year-on-year growth rate) in the first half of next year, in the event that the spread of the virus continues into the second half of 2020, further downward revisions to the growth outlook are likely.

GlobalData’s report, ‘Global Construction Outlook to 2024 – Covid-19 Impact’ reveals the extent to which the construction industry has been affected in all major regions. Danny Richards, lead economist at GlobalData said, “With extreme quarantine measures including lockdowns of entire countries as well as international travel restrictions being imposed across many major economies, the supply shock is expected to dampen economic activity. The direct impact on construction has been the halting of work with labour unable to get to sites or because of disruption in the delivery of key materials and equipment.”

More generally, the construction industry will be heavily affected by the expected widespread disruption to economic activity and a likely drop in investment, with planned projects being delayed or cancelled.

GlobalData foresees particular struggles in the commercial and industrial sectors; businesses in these sectors are most at risk from the severe drop in economic activity, domestically and globally, and their immediate priorities will be on staying afloat and rebuilding their core operations, rather than expanding and investing in new premises or capacity.

The residential sector also will struggle as economic activity weakens and unemployment rises, despite low interest rates and direct government support. There is a high risk that a considerable proportion of the early stage projects in these sectors will be cancelled or at least pushed back, with few new projects starting in the second quarter of 2020 as firms review their expansion plans.

Mr Richards added, “Governments and public authorities will likely be aiming to advance spending on infrastructure projects as soon as normality returns so as to reinvigorate the industry. With interest rates falling to record lows, borrowing costs will be at a minimum, but the success of government efforts to spend heavily on infrastructure will be dependent in part on their current financial standing.

“Moreover, with most governments prioritising cash hand-outs, particularly to the economically weaker segment, their capability to invest in the infrastructure segment is likely to be constrained, especially in countries with high debts.”