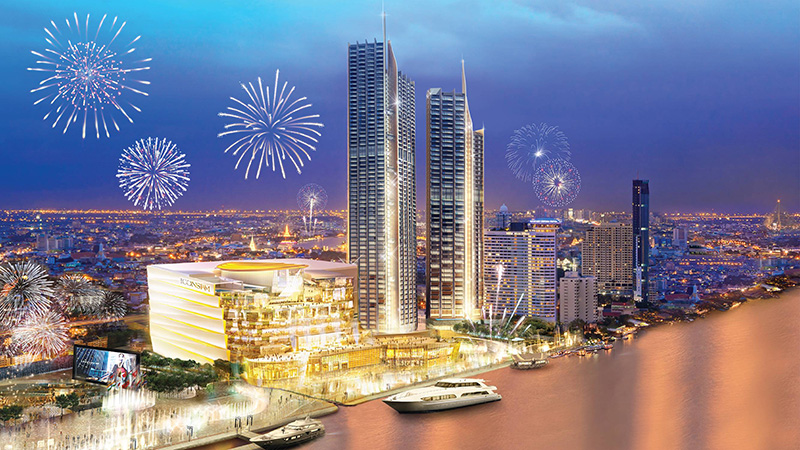 The Iconsiam complex is a new landmark in Bangkok, featuring two of the tallest buildings in Thailand.
mixed-useThailand
Views: 123

Construction of Thailand’s new iconic landmark, Iconsiam, has been completed and it is set to open to the public. This much-anticipated 750,000 sq m mixed-use development in Bangkok is situated by the Chao Phraya River.

Supoj Chaiwatsirikul, CEO of Iconsiam, said that the development is expected to attract tens of millions of visitors a year. “Iconsiam is the first commercial development in Thailand to sponsor large-scale public infrastructure to mitigate potential traffic congestion. Iconsiam has sponsored the improvement of public piers along the river as well as donated the Golden Line Skytrain mass transit line,” he said.

Chadatip Chutrakul, director at Iconsiam added, “Iconsiam is one of the most exciting new developments in Asia, inaugurating a globally innovative model for destination development that moves the project away from being a mall or a mixed-use complex to being an inspiring destination.”

Among the highlights at Iconsiam are its two residential towers, which have reportedly become two of the tallest buildings in Thailand. One of them, ‘The Residences at Mandarin Oriental, Bangkok’ features 52 floors and is almost 269 m in height, while the other one, ‘Magnolias Waterfront Residences’, is said to be tallest in Thailand surpassing the 314-m-high MahaNakhon tower, thanks to its 70 floors and the pinnacle that crowns it.

Iconsiam was developed by a joint venture between Siam Piwat, the owner and operator of prestige retail developments such as Siam Centre, Siam Paragon and Siam Discovery; Magnolia Quality Development Corporation (MQDC), the owner and developer of luxury quality residential and mixed-use projects; and multi-national conglomerate Charoen Pokphand Group.

The residential towers were built by Italian-Thai Development PLC (ITD) with the help of two luffing-jib cranes from Comansa, the LCL165 and LCL190. Both cranes were supplied by Comansa’s Thai distributor, Smart (1994) Co Ltd, which also carried out maintenance and services of the cranes. 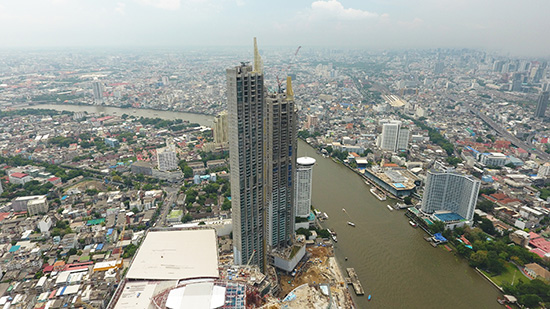 Above: The residential towers at Iconsiam under construction. (Image: Sirirach Denphaetcharangkul)

The LCL165 worked at the top of The Residences at Mandarin Oriental with a maximum load capacity of 8 t. The crane was assembled with the internal climbing system and because of this, it was braced to the internal structure of the building and could be climbed easily and safely as the building grew in height.

The Comansa LCL190, with a 12-t maximum load capacity, was used at the Magnolias Waterfront Residences from January 2016 to May 2018. This crane was assembled with the external climbing system, with a final tower height of 287 m.

In order to lift and move the loads to such heights without any problems, the LCL165 and LCL190 were fitted with optional hoist cable drums, with a capacity for 1,000 and 1,280 m respectively. 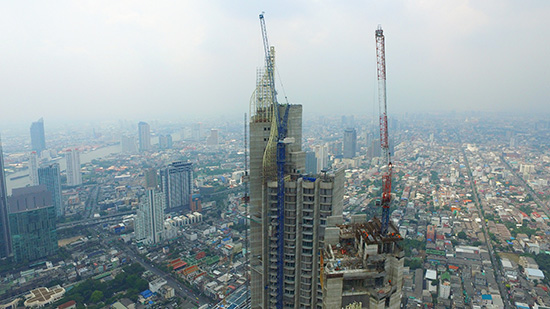 Above: Comansa cranes carry out lifting works on the residential tower developments. They were equipped with optional high-speed hoisting motors, which greatly shortened the work cycles. (Image: Sirirach Denphaetcharangkul)

The construction of both towers had been a challenge for ITD due to the project’s tight deadline: only 38 months from the first foundation work to the delivery to the client. This pace of work not only required the cranes to operate for almost 20 hours a day, but also that they did so at high speeds. Therefore, the cranes were equipped with optional high-speed hoisting motors, which greatly shortened the work cycles. The LCL190 was able to reach speeds of up to 303 m/min and the LCL165 was 310 m/min. As a result, the Magnolias Waterfront Residences could achieve a growth rate of one floor every four days, equivalent to seven floors each month. 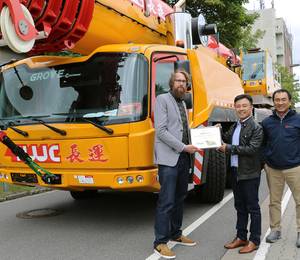