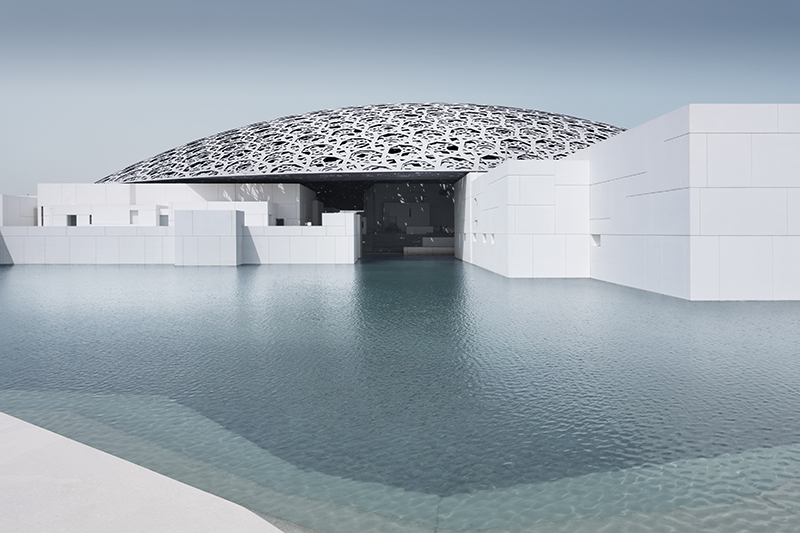 The much-anticipated Louvre Abu Dhabi will be opened to the public tomorrow (Saturday 11 November). Its complex engineering concept has made it one of the most innovative and challenging museum projects built in recent times.

Located on the waterfront in Abu Dhabi’s cultural district Saadiyat Island, the development is the result of collaboration between the governments of Abu Dhabi (the UAE capital) and France in 2007. Construction of the museum took place from 2013 to 2017. The joint venture between Arabtec Construction and Oger Abu Dhabi was appointed as main contractor for the project.

Inspired by the traditional Arabic architectural culture, architect Jean Nouvel designed Louvre Abu Dhabi as a ‘museum city’ in the sea. Its contrasting series of white buildings take inspiration from the medina and low-lying Arab settlements. In total, 55 individual but connected buildings, including 26 galleries, make up this museum city. The facades of the buildings are made up of 3,900 panels of ultra-high performance fibre concrete (UHPC).

Visitors can walk along promenades overlooking the sea underneath the iconic dome, comprised of 7,850 unique metal stars set in a complex geometric pattern. When sunlight filters through, it creates a moving ‘rain of light’, reminiscent of the overlapping palm trees in the UAE’s oases.

“It is a project founded on a major symbol of Arab architecture: the dome,” said Mr Nouvel. “But here, with its evident shift from tradition, the dome is a modern proposal.”

The vast dome with a diameter of 180 m covers the majority of the museum city. Constructed by Waagner Biro (specialists in steel structures), the dome consists of eight different layers: four outer layers clad in stainless steel and four inner layers clad in aluminium, separated by a steel frame 5 m high. The frame is made of 10,000 structural components preassembled into 85 super-sized elements, each weighing on average 50 t.

The dome’s complex pattern is the result of a highly studied geometric design. The pattern is repeated at various sizes and angles in the eight superimposed layers. The dome is supported by four permanent piers, each 110 m apart, hidden within the museum buildings to give the impression that the dome is floating.

The interior dome elevation is 29 m from the ground floor to the underside of the cladding. The highest point of the dome is 40 m above sea level and 36 m above ground floor level. 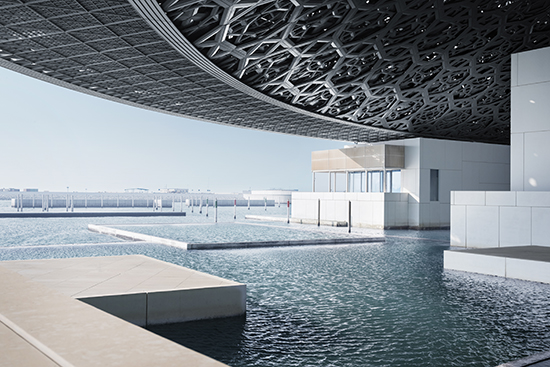 ‘Protected from the sea’

At the beginning of the construction process, the museum was built within a dry dock that created a new, temporary coastline on the southwest corner of Saadiyat Island, backfilled using sand pumped from the sea bed. A total of 503,000 cu m of sand was excavated and 4,500 piles were installed to form the museum’s foundations. This task was completed in 2010.

From 2016, selected pumps were shut down to begin the process of integrating the sea with the site. The final stage involved pumping seawater within the temporary walls around Louvre Abu Dhabi, raising the water level to match the sea level, followed by the removal of the hydraulic cut-off wall and the final construction of permanent marine defences.

Louvre Abu Dhabi is protected from the open sea by approximately 280 marine piles as well as concrete breakwaters, tidal pools and a specially designed ‘wearing wall’ system. The museum’s wearing wall is made from precast units of ultra-high-performance concrete. Each unit is 4 m high and weighs about 10 t. The special concrete material protects the museum from the effects of waves and enables the units to resist outward bending forces, including receding tides.

The pedestrian plaza is set at 4 m above mean sea level. It is equipped with closed balustrades to protect visitors from wave action during severe storms.

The dome is designed to protect the buildings and outdoor plaza from the sun, improve comfort for visitors and reduce energy consumption. This allows visitors to circulate outdoors year-round in a self-regulated ‘micro-climate’.

Low-profile but effective passive energy systems naturally enhance the cooling of the buildings and optimise water usage. The design team employed passive design techniques to improve sheltered outside conditions under the dome. These techniques include: solar shading effect of dome roof and self-shading of buildings; optimised roof perforations to allow daylight without excess solar gain; exposed thermal mass such as stone floor and cladding that can benefit from night time cooling; and light-coloured and reflective materials. 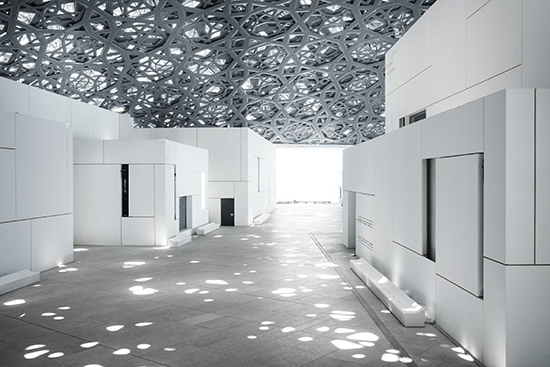